What is the prostate gland? What problems does it cause?

The prostate is a walnut-sized gland that is part of the male reproductive system, and is found below the bladder in the deepest part of the male pelvis (Fig.1). The prostate gland helps produce and store seminal fluid, which is an important component of semen that helps provide nourishment for sperm. It wraps around the urethra below the bladder outlet, and together with the pelvic floor muscles is involved in control of urination.

Fig. 1: The prostate gland is found below the urinary bladder deep in the male pelvis 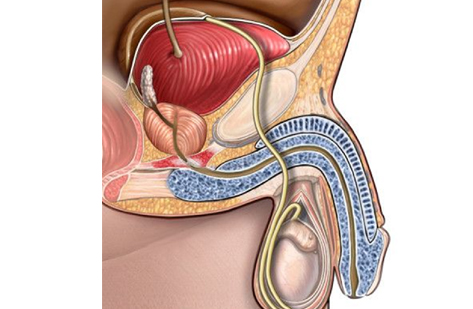 As men get older, their prostate glands will invariably enlarge in size, resulting in one or more possible problems: (1) mechanical obstruction of the prostatic urethra and bladder outlet, leading to slow urinary stream, difficulty starting urination and incomplete bladder emptying; (2) inflammation of the prostate (known as prostatitis), where patients may experience urgent and frequent urination, pelvic discomfort or blood in the urine; and (3) cancerous change within the prostate gland, which if undetected may gradually then spread outside the prostate to the nearby lymph nodes and thereafter the bony skeleton.

I have been experiencing poor urinary stream. What should I do?

Once patients notice these symptoms, they should consult their urologist, who will usually perform the following investigations to assess the cause and extent of their urinary obstruction: (1) bedside ultrasonography of the prostate, bladder and kidneys; (2) uroflowmetry and residual urine measurement (Fig. 2); (3) digital rectal examination of the prostate to palpate for possible nodules on the prostate; and (4) blood tests to assess kidney function and likelihood of prostate cancer (known as prostatic-specific antigen or PSA). In younger men with similar symptoms and a normal-sized prostate, or in chronic smokers with associated blood in the urine, the urologist may recommend further evaluation with cystoscopy, where a flexible endoscope is passed up the male urethra to assess the lower urinary tract for urethral strictures or bladder tumours as alternative causes for such obstructive symptoms.

Fig 2: Uroflowmetry, where male patients urinate into a special device that allows measurement of the urine flow rate. 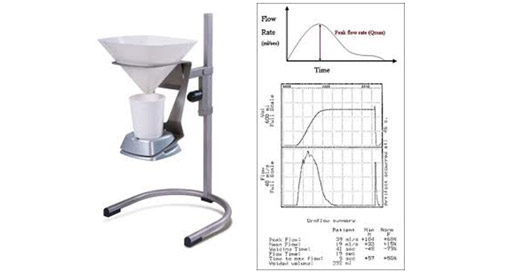 My urologist tells me that my prostate gland is enlarged and causing blockage to my urine flow. What treatment should I start on?

For most patients with early prostate obstruction, their symptoms are usually well controlled with medications known as alpha-blockers, which act on receptors in the bladder neck to relax the bladder outlet during urination. For men with large prostate glands more than 40gm in size, combination therapy of alpha-blockers with 5α-reductase inhibitors (5ARIs) eg. finasteride, has been demonstrated in several large studies to improve urine flow rates and bladder emptying, as well as reduce the likelihood of developing episodes of urinary retention. The latter acts by inhibiting the growth of cells within the prostate, and taken over a prolonged period of time will help decrease the prostate size. However, 5ARIs are often associated with erectile dysfunction and loss of libido as they also interfere with the effects of testosterone on the rest of the body. More recently, daily low-dose Cialis® (tadalafil) has also been reported to improve urinary flow, and may be considered as an alternative treatment to alpha-blockers in men with both prostate obstruction and erectile dysfunction.

Fig 3. Illustration of the effect of various medications for prostate obstruction. 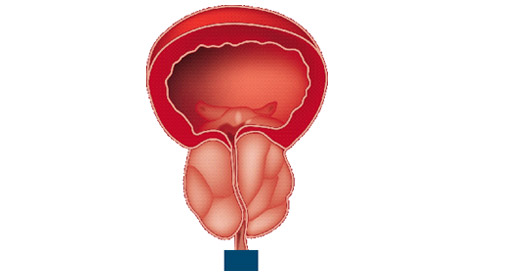 Doc, I have tried taking medications for prostate obstruction, but they don’t seem to work. My urologist tells me I should proceed with transurethral resection of the prostate (TURP) surgery. What does this involve, and are there any risks involved?

In patients whose obstructive prostate symptoms are not improved with medications, most urologists will recommend transurethral resection of the prostate (TURP) as the next treatment option. In TURP, once the patient is anaesthetized, the urologist passes a specially designed rigid endoscope up the penile urethra to reach the prostate gland. A cutting loop with high-energy electrical current is used to widen the prostatic channel by shaving away prostate pieces, which are then evacuated from the bladder by a special handheld pump and sent for laboratory assessment. After the prostatic channel is adequately widened, a urinary catheter is inserted through the urethra into the bladder and irrigation is commenced to wash out any bleeding from the raw surfaces of the prostate gland. This is usually stopped the following day, and the catheter removed 2-3 days after TURP surgery. In most cases, patients have significantly improved urine flow, and are discharged without complications.

Fig 4. Illustration of transurethral resection of the prostate, where a high-energy cutting loop is used to serially cut prostate chips from within to widen the prostatic channel. 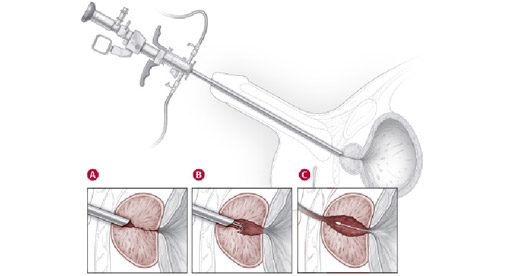 The main risk of TURP surgery are persistent significant bleeding from the cut surfaces of the prostate gland, which occurs in 5% of all cases. If present, it may cause clot retention of the bladder, where urine is not able to drain out of the blocked catheter. This will necessitate blood transfusion, manual washout of the clots through the catheter, and if unsuccessful, return to the operating theatre for washout of the clots under anaesthesia. This risk is higher in patients with acute urinary retention; those with very large inflamed prostate glands; and in patients on anticoagulants eg. aspirin, warfarin, Plavix® etc. Less common complications include bladder perforation, temporary urinary incontinence, or delayed scarring of the bladder neck or urethra with recurrence of obstructive urinary symptoms.

Compared to earlier TURP technology using monopolar electrical energy, the incidence of such complications have dropped significantly with the advent of bipolar TURP2. In bipolar TURP, the high energy cutting loop allows the surgeon to cut and stop bleeding simultaneously, with much less collateral energy damage to the nerves in the pelvic floor and urinary sphincter. In addition, the use of normal saline as irrigation fluid in bipolar TURP (instead of glycine) has minimized the risk of TUR syndrome. This means that urologists are no longer under time pressure to stop the surgery after an hour for fear of causing the patient to become fluid overloaded with electrolyte imbalances, and can complete the surgery successfully in one sitting regardless of prostate gland size. As such, bipolar TURP devices have replaced monopolar TURP in most hospitals today as the standard operating system, and is recommended by the European Association of Urology for improved clinical outcomes.

Is the Greenlight™ Laser a safer alternative to TURP surgery for prostate obstruction? What does this involve?

The Greenlight™ Laser is an innovative laser system that uses either a kalium-titanyl-phosphate (KTP) or a lithium triborate (LTO) laser at 532nm wavelength to widen the prostatic channel by vaporising the prostate gland at high energy. The laser energy is absorbed by haemoglobin but not by water, resulting in immediate ablation of prostate tissue with minimal bleeding during the procedure. The benefits of GreenLight laser vaporization of the prostate include shorter hospital stay and catheter time, and less intraoperative bleeding. However, as the prostate tissue is vaporized, no tissue is available for laboratory analysis for presence of cancer cells in the prostate.

In 2015, three different GreenLight™ lasers are in clinical use – the 80-W (KTP), 120-W HPS (LTO), and 180-W XPS (LTO) lasers. The latter two laser systems (American Medical Systems, Minnetonka, USA) are currently in use in Singapore, with the 180-W XPS swiftly gaining popularity. The intermediate-term functional results of 532nm GreenLight™ laser vaporization therapy are comparable to TURP surgery3. There are also several papers validating its safety in “difficult prostates” such as patients with large glands >80ml, on anticoagulants, and those in urinary retention4. Given the published scientific data, the European Association of Urology now recommends GreenLight™ laser therapy as a safer surgical alternative to TURP surgery, and where available should be considered as first-line treatment in patients on anticoagulants or at high cardiovascular risk. 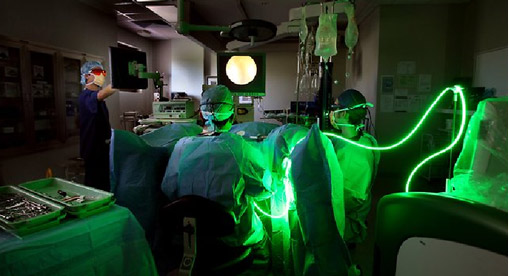 I read about robotic surgery for prostate enlargement. Is this a better alternative to TURP surgery?

Robotic surgery refers to the use of a robotic surgical platform known as the da Vinci® Surgical System (Intuitive Surgical, Sunnyvale, USA) to perform minimally invasive surgery through small incisions. This innovative technology comprises a surgical cart that is docked next to the operating table to small ports placed through incisions <1cm in the patient’s abdomen. Robotic wristed instruments are then passed through these small ports into the abdomen, which are controlled by the surgeon sitting at the operating console some distance away from the operating table. A binocular camera lens affords the surgeon a 3-dimensional view of the operating field, which can be magnified up to 12 times. The surgeon then manipulates the camera lens and the various robotic instruments at the console using the hand controls and pedals. These specially designed instruments afford the surgeon excellent precision and dexterity of surgical movement because of their patented robotic wrist technology.

Fig. 6: The da Vinci® Surgical System comprises a patient cart docked next to the patient on the operating table, while the surgeon operates from a console some distance away 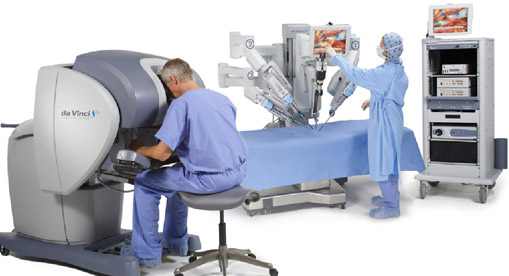 In Singapore and the United States today, 90% of all surgeries to remove the entire gland in prostate cancer are now performed using the da Vinci robot. However, its use for benign prostatic obstruction has been fairly limited to patients with very large prostates >100ml, where open simple prostatectomy had previously been the standard treatment approach5. In robotic-assisted simple prostatectomy, the centrally enlarged portion of prostate gland is surgically removed by making an incision in the bladder through small incisions in the abdomen. The high cost of this procedure and prolonged catheter time required for the bladder incision to heal, makes this novel approach unlikely to become popular with patients when other technologies described above are now able to deliver superior clinical outcomes at a lower cost.

There are so many treatment options available for prostate enlargement. What would you say to a patient contemplating prostate surgery?

In 2015, advances in laser and transurethral endoscopic technologies have made surgery for benign prostate obstruction a very safe undertaking. Previously feared complications of massive bleeding, bladder perforation and urinary incontinence from prostate surgery have become uncommon. High-risk patients with large glands >80ml, on anticoagulants or those with high cardiovascular risk, may now be treated safely using the GreenLight™ laser vaporization technique without need for them to stop their anticoagulants. In this age of endoscopes, lasers and robots, patients have little to fear should they need to undergo surgery to unblock their enlarged prostates, and can look forward to a much better quality of life once they have made the decision to proceed. 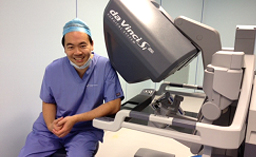 Dr Tan Yau Min, Gerald is a senior consultant urologist at Mt Elizabeth Novena Hospital with over 18 years of clinical experience. He is internationally renowned for his expertise in prostate cancer research and treatment, having been involved in over 550 robotic prostatectomies. In 2012, he was named the Outstanding Young Urologist of Asia by the Urological Association of Asia. He may be contacted at www.drgeraldtan.com.sg.