What does vasectomy mean?

Vasectomy has become a very popular and effective method of birth control for couples who have completed their families, with 20-25% of such contracepting couples in the United States, United Kingdom and Canada choosing vasectomy1. Since its inception in the 1960s, there have been many refinements to both surgical technique and instrumentation for this procedure. Compared to tubal ligation in women, which involves surgery within the female pelvic cavity performed under general anaesthesia, vasectomy is a safe and straightforward procedure for men which may be performed under local anaesthesia as a day surgery procedure, with quick recovery and return to regular activities.

How Does A Vasectomy Work?

The vasa deferentia are tubes which carry viable sperm produced in the testicles to the male urethra, which are discharged together with seminal fluid from the seminal vesicles to form the semen at time of ejaculation. During a vasectomy, the vas deferens on each side is identified, delivered through a small incision in the scrotal wall and divided, thereby disrupting the delivery of viable sperm out of the body. The cut ends of the vas deferens are tied off with sutures, and one of the ends may be covered by the layers of overlying tissue to minimize the possibility of the severed ends restoring continuity in the future (known as fascial interposition).

Figure 1: In vasectomy, the vas deferens on each side is cut and both ends tied off surgically to prevent successful passage of sperm from the testicles out of the body

Innovations in surgical techniques for vasectomy have included (1) no-scalpel vasectomy (NSV), in which the surgeon uses a sharp pointed forceps to puncture the scrotal skin and deliver the vas deferens; (2) use of fascial interposition; and (3) use of cautery to occlude the severed ends of the vas deferens. These techniques have been validated in several studies to improve the success rate of achieving azoopsermia (the absence of viable sperm) after surgery.

How Effective Is It?

Success after vasectomy is conventionally taken to refer to azoospermia documented on semen analysis obtained 3-4 months after surgery. The US Collaborative Review of Sterilization prospective cohort study reported vasectomy to have a success rate of close to 99.9% at a year after surgery2. In other words, for every 1,000 males undergoing this surgery, only 1 will fail to be rendered azoospermic after the surgery. This may occur due to (1) early recanalization of the vas deferens, (2) technical failure, or (3) presence of an unrecognized accessory vas deferens at time of surgery that was not ligated. In rare cases (0.04-0.08%), some patients may develop a phenomenon known as late recanalization, resulting in delayed return of fertility and unplanned pregnancy despite initial documented azoospermia after vasectomy3.

The British Andrology Society guidelines recommend that initial assessment of the semen sample should be obtained only after 16 weeks following surgery, after the patient has produced at least 24 ejaculates prior to providing his semen samples for analysis. If no viable sperm is identified on a centrifuged specimen, the vasectomy may be considered a success after 2 sperm-free ejaculates, and the couple may then safely discontinue their conventional contraceptive methods3.

Are There Any Side Effects Following Vasectomy?

Vasectomy is a very safe procedure with excellent outcomes in experienced hands, and does not impair men’s libido or ability to experience normal orgasm and ejaculation after the surgery. Early complications after surgery include scrotal bleeding, haematomas and wound infections. For the most part, these may be observed without need for corrective surgery as they will resolve spontaneously with painkillers and antibiotic coverage. In 3-6% of patients may complain of persistent chronic discomfort in their testicles after vasectomy, which is widely believed to be due to congestion or infection of the epididymis, or presence of a sperm granuloma. Thankfully, the majority of such patients are not severely debilitated by this discomfort. Large cohort studies have also demonstrated that vasectomy is NOT associated with an increased risk of either testicular or prostate cancer4.

Can It Be Reversed?

For the most part, men undergoing vasectomy must accept that the procedure is permanent.

For some men, their family situation may change some time down the road (unexpected bereavement of their children, divorce and wishes of a new partner to start a new family, etc). Modern surgical techniques for vasectomy reversal have been developed and continue to be refined. These involve identifying both the ligated severed ends of the vas deferens and restoring anatomic continuity of these tubes, usually with the help of an operating microscope (known as vasovasostomy). In some cases, the quality of viable sperm in the vasal fluid may be very poor after identifying the cut ends of the vasa, and require a technically more complex procedure to join the vasa to the epididymis (known as vasoepididystomy) using the microscope.

Figure 2: During vasectomy reversal, the cut ends of the vas deferens are identified and re-attached using very fine sutures with the aid of an operating microscope 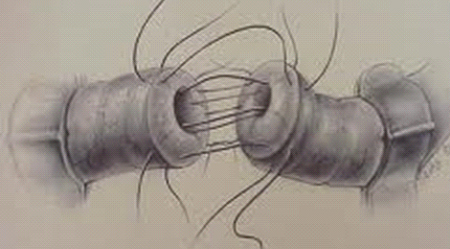 The success of these microscopic vasectomy reversal procedures, as evidenced by the presence of sperm in the ejaculate, has been reported in 85-90% of men5. Factors that determine the likelihood of success after a vasectomy reversal include (1) a short duration between vasectomy and decision for reversal, (2) presence of a sperm granuloma, and (3) a long segment of the testicular vasal segment.

However, only about 60% of couples actually go on to successfully conceive a baby after vasovasostomy6. Female partners who are over the age of 35 years and have not borne children before, are less likely to result in successful pregnancy despite a successful vasectomy reversal.

Innovations in surgical technique and instruments have made vasectomy a very safe and effective method for birth control. Vasectomy reversals are now possible with modern microscopic surgical techniques, but outcomes are variable. Nonetheless, a decision to undergo vasectomy should not be taken lightly, and ideally should be made jointly with the female partner after a detailed consultation with their urologist.